Cat in the Hat Statue and Sesquicentennial Plaza 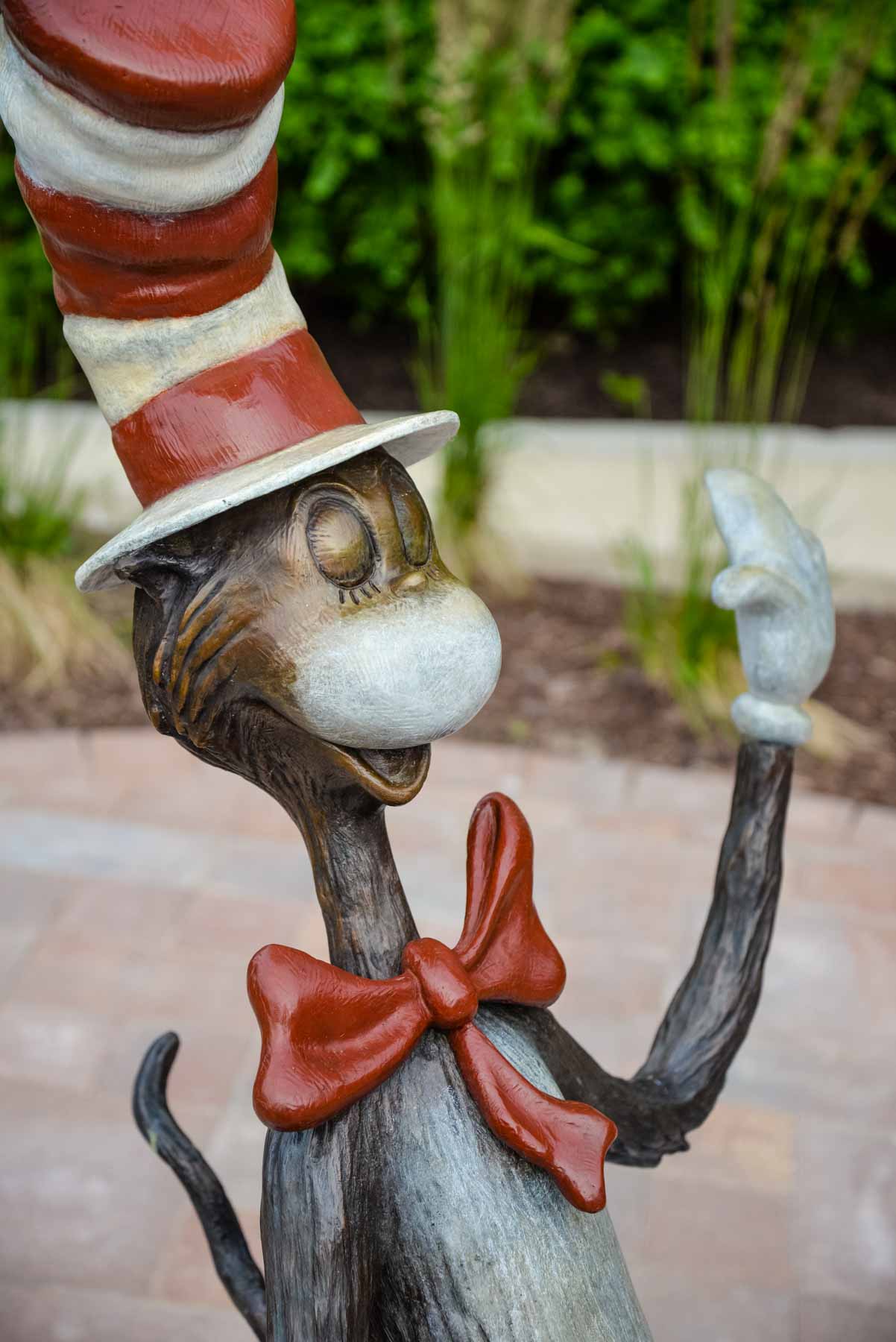 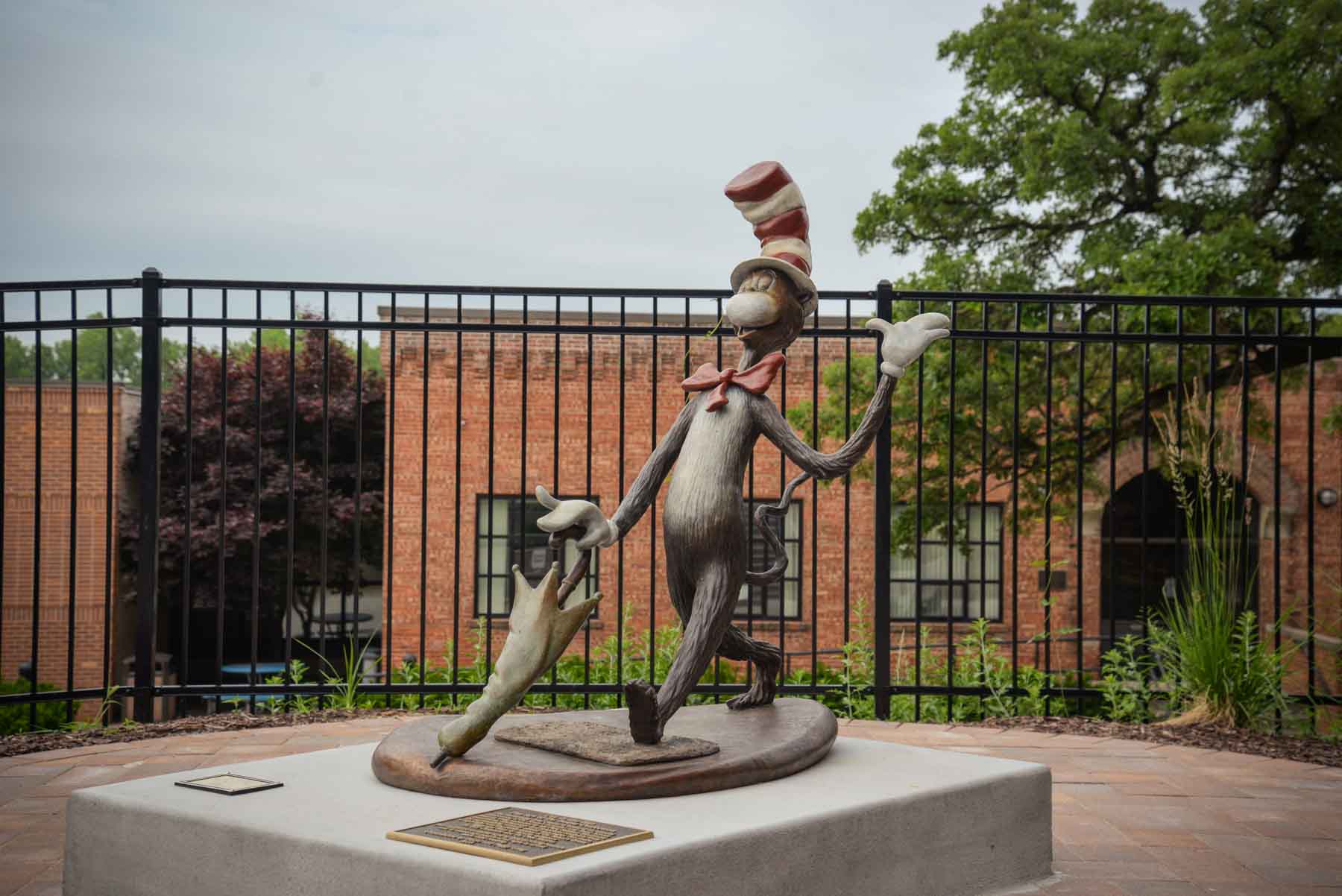 The Sesquicentennial Plaza was added in 2018 to celebrate the College’s founding 150 years ago in 1867. The Plaza hosts outdoor events and a Cat in the Hat bronze sculpture. Paving stones in the Plaza celebrate alumni and friends of the College.

Cat in the Hat Statue

This bronze statue was donated by long-time faculty member Dr. Daryl Long and his wife, Peggy. Dr. Long taught on the Peru State Campus for fifty years (January 1967 to January 2017) and is now a member of the faculty emeritus.

The Cat in the Hat statue was enlarged from an original maquette inspired by Dr. Seuss’s character and created by artist Leo Rijn. The statue and maquette are part of the Dr. Seuss Bronze Tribute Collection.

DrSeussArt.com provides, “Artist Leo Rijn was selected as the inaugural sculptor for Bronze Tribute Collection due to his prized work with some of today’s top talent in the world of film, entertainment and the visual arts (including work with Tim Burton and Steven Spielberg). Rijn has been identified as one of today’s brightest sculpting talents because of his ability to breathe life into the written word and successfully transform two-dimensional ideas into three-dimensional works of art.”

Peru State College has hosted an annual celebration of the works of Theodore Geisel, commonly referred to as Dr. Seuss Day for more than 25 years. Since its inauguration, thousands of children from all around the Southeast Nebraska area have come to Peru State College to watch live re-enactments and skits based on Seuss’s seminal works from The Cat in the Hat to Green Eggs and Ham and beyond, performed by Peru State’s students and faculty.

The event began in 1995, supported by the Peru State Educators Association (PSEA) with support from faculty members Dr. Chet Harper and Dr. Bill Clemente. The two would devise a skit based on Seuss’s Green Eggs and Ham, which they would perform yearly at Peru State and on the road at various schools including Tarkio Elementary School’s yearly Dr. Seuss Day celebration in Tarkio, Missouri. In recent years Clemente has even gone as far as to dye his hair green.

Clemente writes, “As to why we continued to do the skit: first of all, the students and faculty asked us to return. And Chet and I took considerable pleasure from the opportunity to get a little crazy; the laughter of hundreds of youngsters also drew us back each year.”

Previously, from a 2010 blog post, Clemente wrote, “Chet and I are always happy to make fools of ourselves in front of hundreds of children.”

While Harper would retire from his faculty position at Peru State in 2003, he would continue to support Dr. Seuss Day and his annual skit with Clemente for an additional fifteen years before retiring 2018. Associate Athletic Director and longtime Dr. Seuss Day collaborator, Ted Harshbarger filled in as Clemente’s partner. Other collaborators include Dr. Daryl Long and Peru State’s President and First Lady, Dr. Dan and Elaine Hanson. The participants wore Seuss inspired costumes (including that iconic red and white hat often worn by the Cat), held dance contests, handed out free books, and performed live book readings.

As each year a different talent pool organized and performed for Dr. Seuss Day, the skits portrayed would change. While the Green Eggs and Ham skit remained a staple of the production and was self reportedly “hammed-up” over the years, more Seuss material was adapted for performances, including The Cat in the Hat, Horton Hears A Who, Yertle the Turtle, I Can Read with My Eyes Shut and various other works. The choice of adaptation was left entirely to the PSEA students performing to decide.

Another important segment to the festivities is the recitation of the Dr. Seuss Reader’s Oath led by Ted Harshbarger, written by Debra Angstead of the Missouri National Education Association.

“So I take this Oath
To make reading my way
Of feeding my brain
What it needs every day.”

While Clemente did not organize the Dr. Seuss Day performances, he was continually invited by the students of PSEA to participate and has spent several years serving as the event’s MC. He has said that student involvement is essential to the success of Dr. Seuss Day.

Clemente said, “Over the years, the students of PSEA impressed me with their energy and commitment to reinforcing in the youngsters a love of reading and performing, ideas, too, that the Seuss books underscore.”

Dr. Darolyn Seay, faculty advisor to PSEA, said in 2020, “The talent shared by these future teacher candidates really made the performances "top notch" and as the faculty sponsor, I am extremely proud of this group... This event continues to grow each year, and with the help of faculty and some generous donations, we have been able to promote this event even better!"

As the event has changed and evolved over its 25 years, the goal has remained the same: engage the youth of the Southeast Nebraska area in the joys of reading.

The history of Dr. Seuss Day at Peru State College stands as a testament to the imagination and ingenuity of Theodore Geisel, that his works can continue to inspire and engage children all around the world no matter what century it is. It waits to be seen how the next twenty-five years will treat Dr. Seuss Day at Peru State College, but if the first twenty-five years are any indication, then we can be sure to expect some degree of “hamming it up.”

Dr. Clemente said, “Green Eggs and Ham served as a beacon for friendship. As faculty members for many years, Chet Harper and I traveled different paths, to be sure. The story illustrates how from a refusal to cooperate friendship endures, even if we refuse in the end to eat lima beans. The story and the performance fused, for use, an enduring friendship, one of the lessons many of the Seuss books proclaim: out of the chaos that characterizes most of the narratives comes a new stability, certainly the hope for something better, for individuals, families, and the environment.”

Dr. Seuss was born Theodore Geisel in 1904. His first book, And to Think That I Saw It On Mulberry Street, published in 1936, was an instant success. His desire to excite children to read led him to write The Cat in The Hat in 1954, followed by 42 other books including Green Eggs and Ham, The Lorax and Horton Hears a Who.

Seuss won countless awards in his lifetime, including Academy Awards, Emmy Awards and a Pulitzer Prize in 1984. His work continues to inspire countless children in the United States and beyond.