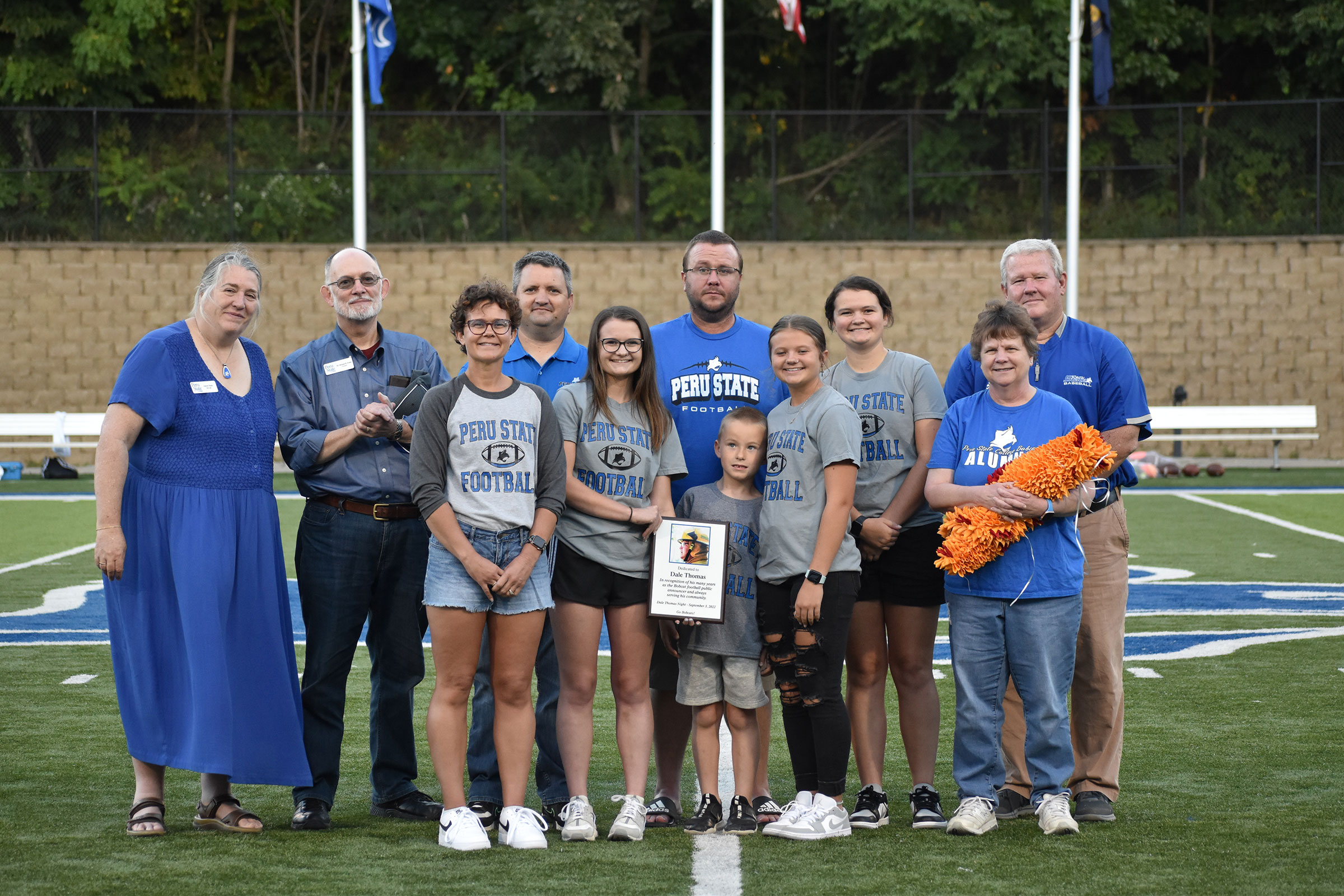 In conjunction with the Bobcat football game against previously ranked #18 Central Methodist (MO), the family of the late Dale Thomas, longtime Peru State football public address announcer, was feted at halftime of the game.

As Thomas was a long-time volunteer firefighter and EMT, area first responders and their families were invited to attend the event free of charge.

The following is the script of the halftime recognition which was presented by Ted L. Harshbarger, Interim Director of the Foundation, and long-time Peru State College staff member:

“For longtime Bobcat football fans, you probably noticed there is a different voice coming from the public address announcer booth this evening. It is the voice of Dave Kasbohm, father of a previous Bobcat football player and former color commentator for B103.

Dale will always be remembered by fans for his “colorful” announcing of the Bobcat games. While he was a huge Peru State fan, he would still be quick to acknowledge a good play by the opponents. In addition, he was known to give nicknames to players such as Jimmy “Super Fly” Sluka or Jake “The Snake” Kelly. Occasionally, Dale would like to assist the officiating crew as well and I would have to sometimes remind him not to do that to which he would respond – “I know, but sometimes they just need help.”

Dale was a community servant in Auburn where he was a member of the Auburn Volunteer Fire Department and Rescue Squad for many years. He was one of six Auburn fire fighters to volunteer at Ground Zero nearly 21 years ago.

As part of tonight’s celebration, area first responders and their families were invited to attend the game and help celebrate Dale’s legacy. Would all first responders please stand? Thank you for your service of your respective communities.

At this time, we would like to make a special presentation to the members of Dale’s family who have joined us tonight. On the field with the President and First Lady are Dale’s wife – Suzzy, daughter Katy Billings and her husband John and daughters Carolyn, Melody, and Kristen, and son Ryan and his son Dominic.

The family is being presented a rug with a fireman’s hat on it and a plaque noting “Dedicated to Dale Thomas – In recognition of his many years as the Bobcat football public address announcer and always serving his community – Dale Thomas Night – September 3, 2022! Go Bobcats!

A replica plaque is being placed in the Public Address Announcer’s booth as well.

Let’s give the Thomas Family, as well as all the first responders in attendance a big round of Bobcat applause.”

The Bobcats went on to provide the Peru State faithful with a 24-0 win over the visiting Eagles to improve to 1-1 on the season.