Choir Returns for a Standout Performance 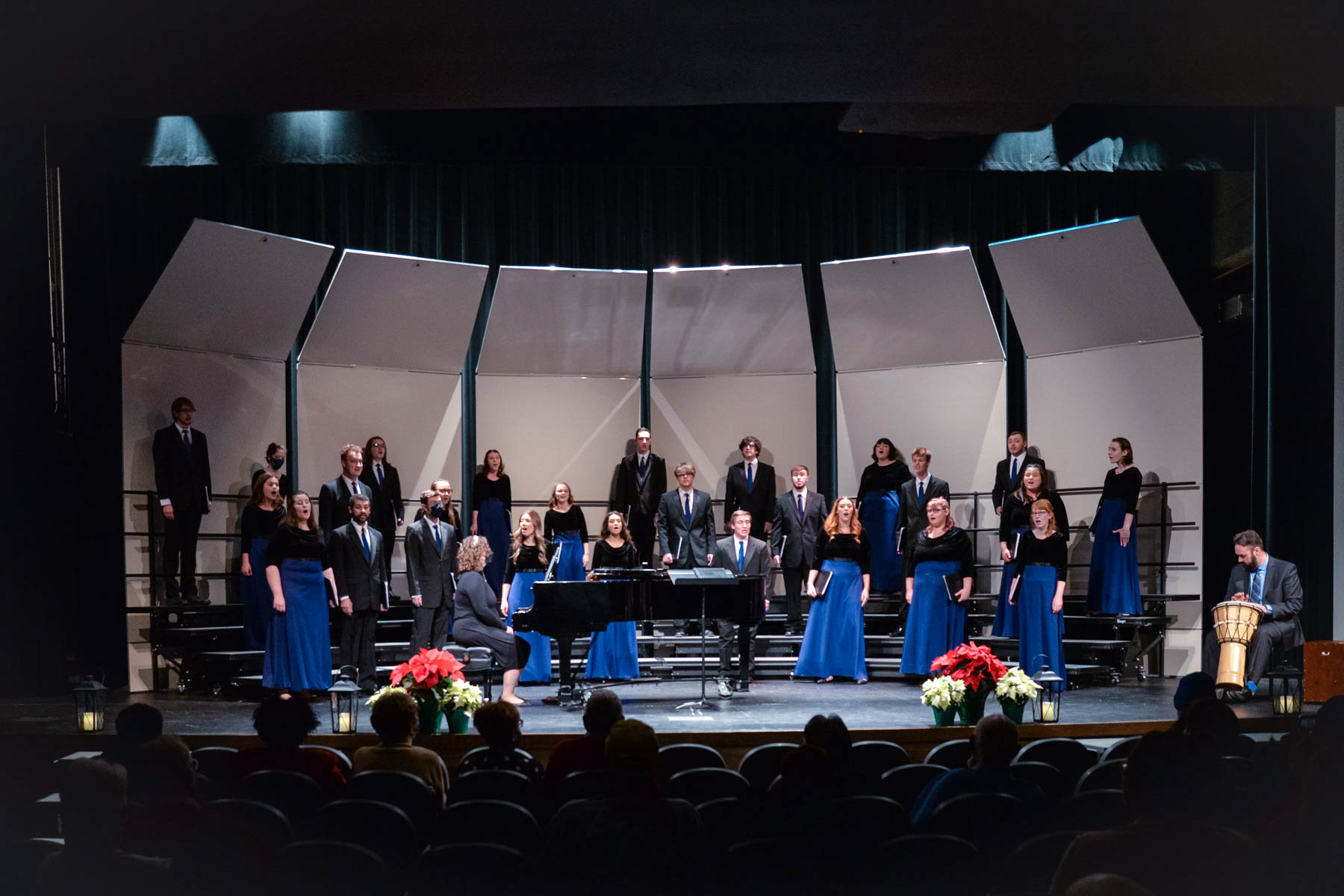 Peru, Nebraska – Earlier in April, the Peru State College had its first choir concert since Christmas in the Performing Arts Center. The show had performances from both the Women’s and Concert Choirs and was a fun return for the students and staff of the music program.

The event began with Women’s Choir, which sang Gloria, Psalm 23, Ubi Caritas, Dies Irae, Flight, The Singer (which featured Professor Mark Benson on flute), and Under the Greenwood Tree. The Women’s Choir did a fantastic job, starting off strong with Gloria and carrying the energy and finesse through the rest of their performance. They were followed up by the Concert Choir, who serenaded the audience with The Last Words of David, Der Gang zum Liebchen, Santo/Holy (featuring Dr. Josh Roach on trumpet), The Music of Stillness, The Boy Who Picked Up His Feet to Fly, and Va, pensiero (from “Nabucco").

Both choirs were directed by Dr. Matt Hill and accompanied by Elizabeth Stinman. Before the end of the final song, the choir had a tribute to its senior performers and wished them the best on their journey after graduation. After Va, pensiero, the show ended, surely a spectacular night that all in attendance had a wonderful time watching. The seniors recognized were Grant Chance – graphic design major from Nebraska City, Asha Christie – early childhood education inclusive B-3 major from Papillion, Benjamin Keyes – K-12 vocal/instrumental from Gretna, Amberlyn Reed – early childhood education and elementary education major from Omaha, and Aliyah Telpner – English major from Papillion.

Christie shared these comments about her experiences with the Peru State vocal department, “I have been involved in one, two, or three choirs each semester throughout my time at Peru State College. I am an early childhood educator, so choir is not something that I needed to do. However, I have loved singing my entire life. Choir was important to me because it was almost like a break from everything else I had going on with school and work. It was an hour and fifteen minutes for me to push pause on everything else and have fun doing something that I love. I also met most of my close friends through my years in Peru State's choirs.”

Both the Concert and Women’s Choirs are open to all students without audition. Women’s Choir meets Tuesday and Thursday from 12:30pm-1:45pm in MUSC 110 and performs a wide range of music in a four-concert season. Concert Choir meets Monday and Wednesday from 12:30pm-1:45pm in MUSC 102 and performs music both from differing musical eras as well as major works on a similar four-concert season. Concert Choir also goes on an annual recruitment tour of surrounding high schools. More information regarding the choir program can be found at https://www.peru.edu/music or Dr. Hill can be contacted at 402-872-2237.