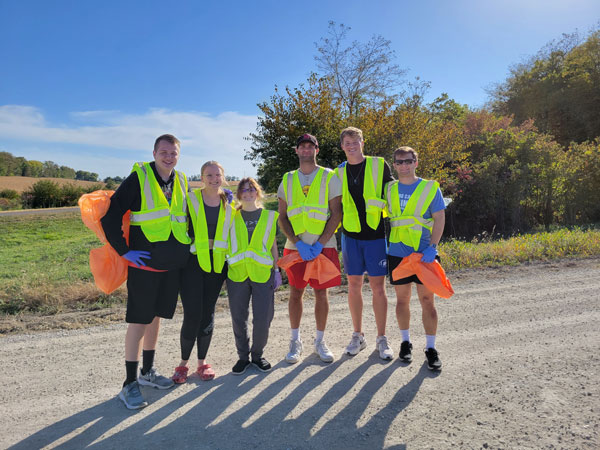 In addition to the gifts, though, Peru State students contributed by participating in various volunteer events throughout the week.

“The Peru State College Giving Day is a way for the Bobcat family to contribute to a cause – whether through volunteerism or philanthropy,” said Ted L. Harshbarger, Interim CEO of the Peru State Foundation.

The Giving Day goals were set at securing different 155 donors on Giving Day and 155 student volunteers during the week. The number 155 is significant as Peru State’s first day of classes was on October 24, 1867 – 155 years ago.

While the goal for number of donors was not reached, it appears that student volunteers may have reached the goal of over 155 hours of community service according to Carrie Bradrick, Director of Student Activities and Programs at Peru State.

Six members of the science club spent time cleaning up the Brownville Library while 13 Rotaract members read and did activities in the Peru Day Care.

Seven members of the Collegiate FBLA (former Phi Beta Lambda) did their biannual Nebraska Department of Transportation Adopt-A-Highway Program trash pick-up. Four members of the Phi Alpha Theta, the academic honorary for social science majors, did clean-up on the Lewis and Clark Trail.

Seven members of the PSCU made blankets for Project Response while 16 members of SAIL made buttons to sell with the proceeds going to the Bobcat SOS fund for Giving Day.

CAB had the most members as 18 provided service during the week as they helped pick up trash around campus and the residence halls. Four BSU members had fun reading books at the Day Care.

Two groups did trick or treating for Bobcat Bites – the student food pantry on campus. Members of the NSLS and RHA visited the Peru and Auburn communities for pantry items.

The staff at the Foundation genuinely appreciates the efforts of the students and their organizations for their volunteerism during the second giving day.

Four primary areas of support were targeted for the Giving Day in 2022. Project ROAR – the capital campaign for five new buildings on campus – received $13,270 from 49 donors. What You Love – an area which allowed individuals to donate to any program, sport, or scholarship – garnered $8,950 from 21 donors.

Twenty donors contributed $5,610 to the Greatest Needs category which allows the Foundation to provide support to the faculty, staff, and departments on campus. The Bobcat S.O.S. (Serving our Students) received $3,760 from 17 donors. This fund will be used to help students with small grants with temporary financial hardships.

Harshbarger noted that for the past two years, a generous donor has challenged the Foundation donors to contribute $25,000 and if that was met, the donor would add another $25,000. “We were initially concerned about not making the goal at the end of the 24-hour period. The phone rang and fortunately, it was a generous donor who stated that she wanted to make sure that the Foundation could still meet the challenge to earn the extra $25,000,” noted Harshbarger. “Shortly after hanging up the phone, the amount we needed was received which put us over the top. Obviously, hats off to that donor as well as all our donors and the individual providing the challenge the past two years.”

To learn more about Peru State’s Giving Day, go to www.peru.edu/foundation/givingday. Plans are underway for 2023! The tentative dates for the 24-hour event are October 19 and 20 which will coincide with the College’s 155th birthday of its actual first day of classes.