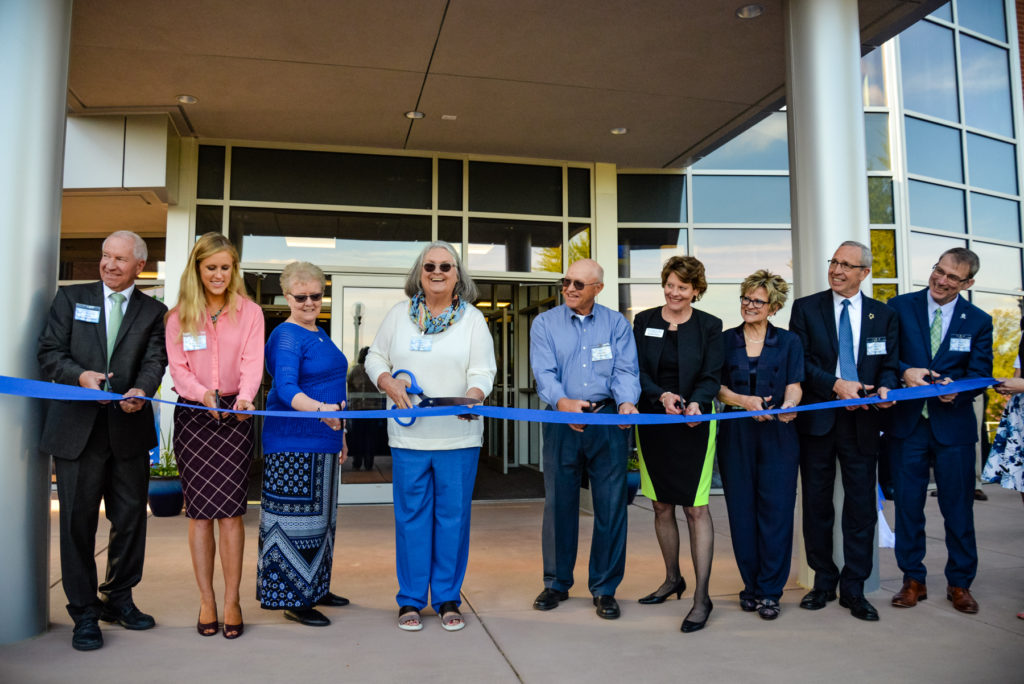 The Grand Opening of the Performing Arts Center saw the cutting of the ribbon, a performance from members of the Peru State Music Family, and the Debut of the Phi Alpha Theta Oral History Documentary, "The Little School That Could."

The Performing Arts Center was originally built in 1921 and the theatre retains the sweeping curves of the time period. The new addition includes a new main and second floor lobby, costume and props workshops, dressing rooms, a green room, new bathrooms and an extended stage.

The renovations were made possible through funding by the Nebraska State Legislature and gifts from many alumni and friends of the College. At the Grand Opening, Peru State College and the Peru State College Foundation were able to recognize the contributions of these private donors.

Dr. Dan Hanson, president of Peru State College, spoke several times throughout the evening of his high regard for the work and gifts of so many people. His appreciation noted the support of the Nebraska State Legislature, including former District 1 Senator Dan Watermeier, and the gifts of many generous alumni and friends.

Todd Simpson, chief executive officer of the Peru State College Foundation, noted “Important projects like the renovation of the Performing Arts Center would not be possible without the dedication of Peru State’s loyal donors. They were the real stars of the Grand Opening!”

The Green Family Auditorium recognizes the support of the extended Green Family, the descendants of John and Ella Green. The idea for naming the auditorium or the Green family's commitment to education originated with Larry and Sue Green. Larry, a graduate of Brock High School and Peru State College (class of 1977), and a retired executive from Ball Corporation, served as the chair of the Peru State College Foundation Board of Directors until his passing January 2019.

In celebration of their 50th wedding anniversary , Garth and Gloria (Bean) Adams made a generous gift to support campus beautification and a landscape screening project. As local residents, the Adams have a special interest in maintaining the beauty of campus. Their support allowed for additional campus beautification work to be completed, including a landscape screening project that extends the visually appealing design from Park Avenue along 5th Street.

The Adams met at Peru State College. Growing up in Peru, Garth attended the campus school beginning in kindergarten, and then completed his education as a 1967 graduate of Peru State. He is one of a few people with the unique distinction of attending every year of school - from kindergarten through college - on the Campus of a Thousand Oaks.

Their donation is recognized both on a plaque on the pergola in Sesquicentennial Plaza (adjacent to the Performing Arts Center) and on a second plaque on a brick pillar on 5th Street.

In 2018, the Teten family made a generous gift in memory of Betty Jewel (Whipple) Teten to commemorate her love of education. The Performing Arts Center is an integral part of the School of Education's outreach into the community.

Betty Teten was born in Nebraska City. She graduated from Nebraska City high School in 1951 and Peru State College in 1960 with a bachelor's degree in education. Teten taught in many schools before retiring in 1993.

Betty Teten passed away in 2017. To honor her career as an educator, Betty's husband Eldon Teten (class of 1951) and their children made a gift to the College to name the new green room in her memory.

The second floor lobby is named for Butch and Dobey Haws, natives of Falls City, who became educators in the Lincoln area. Butch's knack for ingenuity, honed in industrial arts classes at Peru State (class of 1969), led him to a career in custom manufacturing.

A plaque located in the second floor lobby highlights their special contribution to the Performing Arts Center, "The Haws Family Lobby recognizes the support of C.W. "Butch" and Dobey (Falter) Haws, their gratitude for education, and their appreciation of the arts in southeast Nebraska."

Cindy (class of 1982) and Tim (class of 1984) met while they were both students at Peru State College. They own and operate a family business, Rixstine Recognition, in Lincoln. Their son, Justin Hoffman, is currently enrolled at Peru State as a music major with a focus on piano performance.

The Hoffmans have remained active through the Lincoln alumni Chapter, the National Alumni Association Board, and as current members of the Peru State College Foundation Board of Directors. Their support for the Performing Arts Center is celebrated with a plaque inside the new grand piano which was purchased as part of the renovation project.

The Douglas Entrance Plaza is named for Joyce and her late husband, Judson, who provided the lead gift for the Park Avenue improvement project. Mainstreet Bank also served as the lead sponsor for the College's Sesquicentennial commemorations in 2017. Judson Douglas was a member of the Peru State College Foundation Board of Directors for more than a decade. When he passed away, Joyce completed his term and has since been re-elected to her own three-year term.

Joyce and her son, Justin, have served on committees to create and implement the College's six-year strategic plan. The gift from Mainstreet Bank to support the Performing Arts Center renovation is the latest example of their generous investments that are helping to advance education and the mission of Peru State College.

Artwork and the Sesquicentennial Plaza

The Sesquicentennial Plaza was named to celebrate the College’s founding 150 years ago in 1867. The Plaza will host outdoor events and a Cat in the Hat bronze sculpture. The Cat in the Hat sculpture was donated by Dr. Daryl and Peggy Long in honor of the years of Dr. Seuss activities held on campus by Peru State education students.

Alumni and friends of the College that donated to the Sesquicentennial Plaza were recognized with engraved paving stones in the Plaza. This donation program is still running and more information can be found at www.peru.edu/foundation/pavingstone.

The Performing Arts Center also features two brick mural sculptures, Windows to the Past, sculpted by artist Jay Tschetter. One is of W.H. Hoyt and the other of Normal Hall (original building in the space now occupied by Hoyt Science Building).

Tschetter wrote, "I am honored that we were chosen to do the artwork for the theatre building, am pleased with the results and how it fits into the building and that the themes represent the history."

Thomas Veleba contributed to this release.