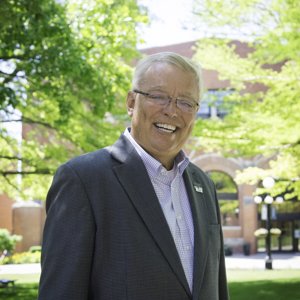 The Distinguished Service Award was established by the Nebraska State College System (NSCS) Board of Trustees. It authorizes each college to nominate a graduate or someone who has made significant contribution to the College or to an alumnus who has achieved distinction and recognition in his or her field. Green was nominated by President Dan Hanson and approved by the NSCS Board of Trustees.

Hanson said, “I was privileged to notify Larry last fall that he was receiving this award, but, unfortunately, he passed away in January."

Grotrian stated, “This college meant so much to Larry. He appreciated earning his business degree here and being a men’s basketball player during his time at Peru State.”

She continued to say, “He valued education and wanted any student to have the opportunity to go to college. That is why he asked our parents, Jim and Mavis Green, several years ago if they would like to give a donation to the Peru State Foundation and have a scholarship in their name, the James G. and Mavis Green Scholarship.”

Grotrian concluded, “'Each life is a book – not to be read – but rather a story to be written.' Thank you, Larry, for sharing your story.” 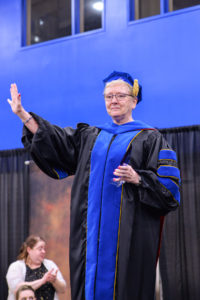 Green was an integral part of Peru State during his lifetime. He graduated from the college in 1971 with a bachelor's degree in Business Administration was was on the basketball team. In 2002, he joined the Foundation Board of Directors. He served on the Foundation's Executive Committee from 2005 to 2008, and became the Chairman of the Foundation in 2015.

Larry and his wife Sue made significant donations to the James G. and Mavis Green Scholarship and to renovate the theater/performing arts center. The Green Family Auditorium in the newly renovated Performing Arts Center recognizes the contributions of Larry and many other members of the extended Green family.

After Green graduated, he ascended the ranks of Constar International and became the Senior Vice President. Constar at the time was the largest provider of polyethylene terephthalate plastic containers in the world.

He then moved on to become the President of Fortune 500 company, Ball Corporation. During his time there, the sales for the Ball Plastic Container Operations division rose from $300 million to $3 billion. 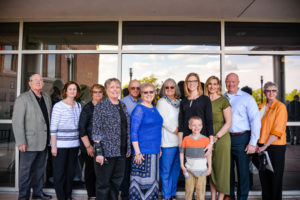 Thomas Veleba contributed to this release.