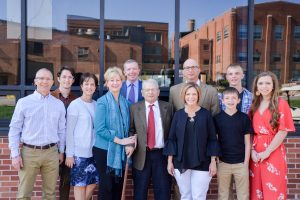 The Distinguished Service Award was established by the Nebraska State College System Board of Trustees. It authorizes each college to nominate a graduate or someone who has made significant contribution to the College or to an alumnus who has achieved distinction and recognition in his or her field. Recipients are nominated by the college president and approved by the NSCS Board of Trustees.

Dan Hanson, president of Peru State College, said, "It is especially fitting that we recognize Senator Floyd Vrtiska in our 150th year because of the pivotal role he played in creating a vibrant future for Peru State College, a future we enjoy today."

"He was a tireless champion for Peru State College, rallying tremendous support from alumni and southeast Nebraskans to partner with Governor Johanns to reinvest in this College.  This reinvestment was the start of a much needed almost 75 million dollar infrastructure upgrade for the College, beginning with the Vrtiska Addition to the Hoyt Science Building in 2005 and continuing yet today."

Recently, Floyd created the first endowed internship fund at the Peru State College Foundation, providing permanent support for a paid internship at the Nebraska Legislature. The Senator Floyd and Doris Wagner Vrtiska Unicameral Internship will allow one student to intern with a legislative office during each legislative session.

Hanson concludes, "One of the College's founders and one of Nebraska's original state senators, Colonel T.J. Majors, is often recognized as the most influential individual of the first century for Peru State College. Senator Floyd Vrtiska is this century’s T.J. Majors, the most influential individual in creating a vibrant future for Peru State in its second century."

Senator Mike Johanns, who served as Governor of Nebraska and U.S. Secretary of Agriculture, gave the keynote address and added, "There are many things in my years of public service that I look back with fondness, but near the top of that list is working with a great Nebraskan that stood up and said Peru State must continue."

Peru State awarded its first Distinguished Service Award in 1960 to Dr. Alexander Stoddard, a 1910 graduate who went on to a career in education and is most famous for his work as superintendent of schools in Philadelphia and Los Angeles. Elementary schools in Beatrice, Nebraska, and Anaheim, California, were named for him. Dr. Stoddard was an early proponent in the use of television as an educational tool, and his educational plans contributed to the development of public educational television.

Senator Floyd Vrtiska and his late twin brother, Lloyd, grew up and lived in Table Rock, Nebraska. He earned his living as a farmer and cattle operations manager and he earned his reputation throughout the region and the state as a tireless public servant.

Senator Floyd Vrtiska and Doris dedicated their lives to service, lives filled with meaning and investment in building a better world. Just a few of Senator Vrtiska’s commitments to public service include serving as Mayor of Table Rock, volunteering for 38 years (34 as Chief) on the Table Rock volunteer fire department, giving his time for 21 years on the Pawnee County Board of Commissioners, and serving in the governor-appointed position of Trustee with the Nebraska State College System.  In the culmination of his service, he was elected three times to serve as District One Senator in the Nebraska Legislature.

Vrtiska (center) with his family.

Becca Jewell contributed to this release.