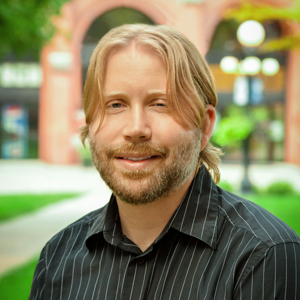 Dr. Wright received his PhD in English from the University of South Florida where he served as a Presidential Doctoral Fellow. Before joining Peru State College’s faculty in 2018 he taught at several institutions, including Loyola University Maryland, Quinnipiac University and Housatonic Community College. He received his MA from Boston College and holds an undergraduate degree in English and Philosophy/Religion from Flagler College in St. Augustine, Florida.

Dr. Wright grew up in Colorado, but lived in Florida, Massachusetts, Maryland, and Connecticut before settling in Nebraska. He is active in several organizations for the study of literature, including the International Association for the Fantastic in the Arts where he currently serves as Division Head for Gothic and Horror Literature.

Dr. Wright’s research is focused on 19th-Century British literature, as well as the horror genre and the Gothic. He also writes about the fantastic, film, and adaptation theory. He has presented and published extensively on Mary Shelley’s novel Frankenstein and its numerous adaptations in film and performance.

In addition to teaching classes in his research areas, Dr. Wright also teaches writing across all levels, as well as courses in Appreciation of Literature, Young Adult Literature, and the full scope of British literature.

Peer-Reviewed Journal Articles:
“Unbridling the Bride: Feminism and Patriarchy in Penny Dreadful’s Frankenstein Narrative,”
forthcoming in Journal of the Fantastic in the Arts.

“Public and Private Folklore: The Function of Folk-Culture in The Return of the Native and Jude the
Obscure.”Victorians: a Journal of Culture and Literature 138 (2020)

“The Penance of Life: the Testimonial Paradigm in Coleridge’s The Rime of the Ancient
Mariner.” Romanticism and Victorianism on the Net. 71 (2019)

“Listening to the Monster: Eliding and Restoring the Creature’s Voice in Adaptations of
Frankenstein” Journal of Adaptation in Film and Performance 8.3 (2015)

“‘I Had Peopled Else This Isle With Dudleys: The Tempest in Uncle Silas.”Victorians Institute
Journal 42 (2015)

“Reflections in Diana’s Mirror: Sir James Frazer’s ‘Survivals’ and the Literary Construction of
Nemi’” The Victorian 2.1 (2014).

Pedagogy, Reviews, and Reference-Related:
Book Review of Gothic Effigy: A Guide to Dark Visibilities by David Anwnn Jones. Journal for the
Fantastic in the Arts 30.3. (2020)

“The Monstrous Origins of the Incel in Frankenstein” co-authored with Jeana Jorgensen.
International Conference on the Fantastic in the Arts, Orlando, FL March 2019

“Unbridling the Bride: Feminism and Patriarchy in Penny Dreadful’s Frankenstein Narrative,”
International Conference on the Fantastic in the Arts, Orlando, FL March 2018

“The Bleakest of Houses: Dickensian Moral Connection in Miéville’s Perdido Street Station,”
International Conference on the Fantastic in the Arts, Orlando, FL March 2017

“Bringing the Empire Home: Fantastic Hermeneutics and British Imperialism in the Victorian
Novel, "  International Conference on the Fantastic in the Arts, Orlando, FL March 2014

“‘Is He a Ghoul or a Vampire?’: The Fantastic Hermeneutics of Wuthering Heights,” Victorians
Institute Conference, Middle Tennessee State U, Murfreesboro, TN, Nov. 2013