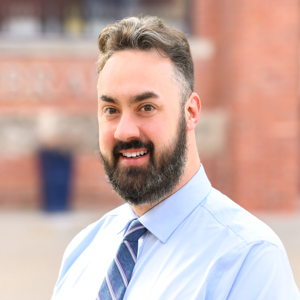 Matt was born and raised in Bellevue, NE, and has spent the majority of his personal and professional life in Eastern Nebraska; save two years in Stillwater, Oklahoma, where he earned a Master’s degree in choral conducting as a Graduate Assistant at Oklahoma State University in 2012, under the tutelage of Dr. Z. Randall Stroope.

He lives in Papillion with his wife Jen and their 2-year-old son, Walter.

Dr. Hill regularly serves as a guest clinician for festivals and honor choirs, and is called upon to adjudicate competitions and festivals in the Midwest and around the country. He enjoys traveling to work with ensembles, and brings enthusiasm and expertise to each interaction. Matt is also an active composer, with works published by Music Spoke Inc. among others.

He founded Sing Omaha Inc. in January, 2007. This 501c3 nonprofit organization serves as the nation’s only K-12/adult choral arts nonprofit, and is comprised of ten choirs and two studios which serve more than 450 musicians in Douglas and Sarpy County Nebraska each year. Sing Omaha Studios offers two locations for private lessons in piano, voice, and guitar with the state’s only fully-degreed faculty, all of whom hold Bachelor’s degrees or better in music.

In addition to his work with Sing Omaha, Matt has served in music ministry steadily since 2003, and has performed as a conductor, chorister, and featured soloist with numerous local and regional ensembles. He is also regularly called upon to conduct clinics, festivals, and honor choirs, and to adjudicate choral/vocal competitions in the Midwest and around the country.

Peru State College named Dr. Hill as the 2019 Teaching Excellence Award winner (faculty member of the year). Matt was honored to join Peru State administrators and other dignitaries in the stage party at the May 2019 Commencement ceremony where he shared a brief address with the graduating class. A video of the speech is available on his YouTube channel and on his professional website MattHillConductor.com  The Nebraska Choral Directors Association honored Matt as their “Choral Conductor of the Year” for the 2018-19 academic year.

Matt was named to the Midlands Business Journal’s “40 Under 40” list of businesspeople in 2017 for his work with Sing Omaha Inc.

Matt was inducted into the Oklahoma State University Music Education Hall of Fame in the Fall of 2014 as its inaugural member.