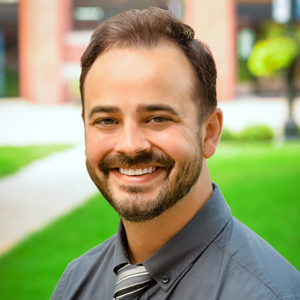 Dr. Charles Hicks joined Peru State College English Faculty from Texas Christian University in 2018, and was previously a Lecturer/Undergraduate Advisor with the University of Texas at Arlington.  Also at Arlington, he was an Assistant Director of First Year English.  Dr. Hicks has published articles and presented papers as well as moderated panels.  He has taught courses including Introductory Composition, Rhetoric and Composition and American Literature. Dr. Hicks has academy and departmental experience on campus as well as having professional memberships. His research interests include American Literature and Horror Fiction.  Dr. Hicks received his BA in Creative Writing from Texas Tech University. His MA in English is from University of Texas-Permian Basin and he received his Ph.D. in English are from the University of Texas-Arlington.
Dr. Hicks’ scholarly work focuses primarily on representations of motherhood in science-fiction and horror film and literature. His articles have appeared in Hypatia, Journal of the Motherhood Initiative for Research and Community Involvement, and Journal of Feminist Scholarship.

Hicks, Charles. 2016. “If the Exosuit Fits: Becoming the Alien Queen in Alien and Aliens.” Journal of the Motherhood Initiative for Research and Community Involvement, 7: 25-34.