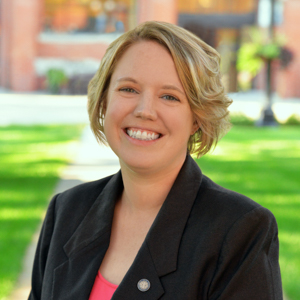 Kelli (Bendickson) Gardner is a native of Forest City Iowa. After graduating from Forest City High School in 1996, she attended Iowa State University, where she completed her undergraduate and graduate studies. She joined Waldorf College in 2005 to establish their then-new bachelor’s program in psychology, and came to Peru State College in 2009.

During her time at Iowa State University, Dr. Gardner conducted research in two main areas. First, she studied social support, which involves what people say and do in an effort to help others who are experiencing stressful situations. Later, she examined relationship satisfaction in long distance romantic relationships from multiple theoretical perspectives. Dr. Gardner continues to conduct research but especially enjoys mentoring undergraduate students as they design and conduct their own research projects. Several of these collaborations have resulted in student presentations at regional conferences including the Midwestern Psychological Association, NPS/PERK Undergraduate Research Conference, and the Great Plains Undergraduate Psychology Conference.

Despite enjoying research, Dr. Gardner considers herself a teacher first. She has taught a wide variety of classes in psychology and won awards at both Iowa State University and Waldorf College for excellence in teaching.

At Peru State College, Dr. Gardner served as the director of the Honors Program from 2012-2016 and also advised PRIDE, Peru State’s club for the LGBTQIA+ community, from 2016-2021. In 2017, she led the psychology program’s successful effort to establish their first-ever chapter of Psi Chi, the International Honor Society of Psychology.

Dr. Gardner lives in Bellevue, NE with her family.

The connection between human beings and the natural world

Scholarship of teaching and learning