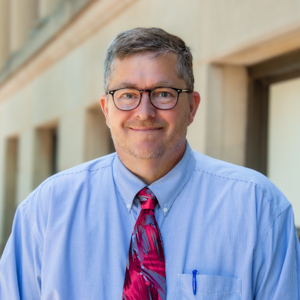 Personal Motto: “Leave no stone unturned in pursuit of what you seek.”

Dr. Greg Galardi began his career at Peru State College in 2004 as an instructor. Currently, he is an Associate Professor of Business Administration. Galardi teaches courses in Organizational Communications, Marketing Research, Consumer Behavior, Risk Management, and Insurance, Transition Strategies, and the Prior Learning-Life Experience Portfolio course for non-traditional learners.

Dr. Galardi’s research interests focus on consumer behavior with an emphasis on employee and consumer satisfaction across the business and public administration segments. In 2019, Dr. Galardi was appointed as Editor of Lambda Alpha Epsilon - Journal of the American Criminal Justice Association, where he has served as an Associate Editor since 2006.

Beyond teaching, Dr. Galardi served in a wide variety of roles at Peru State College. Galardi was the Dean of Professional Studies from 2009 to 2018, Dean of Graduate Programs from 2007 to 2008, Director of Community Engagement from 2006 to 2007, and served in the Athletics Department as an assistant coach/recruiter for Women’s Basketball (2007-2008) and Men’s Basketball (2008-2010).

Dr. Galardi retired from the Papillion Police Department in 2004 after a very successful law enforcement career for the City of Papillion, Nebraska, and before that, the City of LaVista, Nebraska. Assignments included Acting Chief of Police, Police Lieutenant (Administration, Investigations, and Operations Commander), Police Sergeant, DARE officer, Police Field Training Officer, and Police Officer. He was a traffic radar instructor and pepper mace instructor. His career included numerous commendations for his exemplary performance in the investigation and arrest of felony criminal suspects, lifesaving, hostage negotiation, community policing, and grant writing. Galardi was awarded Employee of the Year three times during his public service career.

Dr. Galardi’s community service projects include working with the Special Olympics and Jaycees. In 1998 and 1999, Galardi received State of Nebraska Governor’s awards for his contributions to the Special Olympics. Galardi volunteered as a youth basketball coach for over 25 years in Auburn, Bellevue, Omaha, Papillion, Wahoo, and Weston, Nebraska.

Dr. Galardi is a past advisor for the Psychology-Sociology-Criminal Justice club at Peru State College.

Dr. Galardi considers the ultimate reward of an educator to be students calling to advise they successfully started their professional career or are continuing progress towards graduate education degrees.