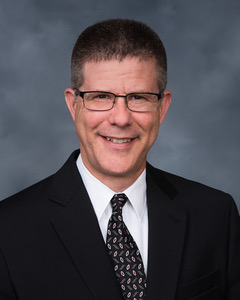 Mark Benson is an adjunct professor of music at Peru State College where he directs the Peru State Jazz Ensemble. He is also the conductor of the Intergeneration Orchestra of Omaha. Previously he was the director of Instrumental Music at Mission Middle School in Bellevue, NE.

He is a saxophonist with the Nebraska Jazz Orchestra and performed with them at the Montreux Jazz Festival in 1997. He is also a clarinetist with the Lincoln Municipal Band and is a member of the saxophone quartet Group Sax. He has performed with the Count Basie Orchestra, the Temptations, several other touring productions, and is an active freelance musician in the Omaha area.

His compositions and arrangements have been performed by the Nebraska Jazz Orchestra, the U. S. Air Force Heartland of America Band and Paul Shaffer among others. He is also active as a clinician and adjudicator.

Mark holds degrees from Northern Illinois University and the University of Nebraska at Lincoln.